Henry Moon was born on the 10th December, 1807, in Longforgan, Perthshire, Scotland, to Parents Alexander Moon & Elizabeth IRONS his father, Alexander, was 34 and his mother, Elizabeth, was 29.

At the age of 33 Henry and his family set sail to Sydney, Australia. Then, his family consisted of wife Janet and children Margaret & Elizabeth, along with George Aitken MOON. The family left Plymouth on the 29th of September 1839 on the ship "ALFRED" and arrived in Sydney on the 7th January 1840. Soon after arriving in Sydney, son George passed away due to illness.

They arrived as free settlers through the Assisted Immigration Scheme. Henry, Janet and children were situated in the Queanbeyan, Canberra region in the first stage of settlement. The family left the area around the years of 1843/1844.

Henry worked in Independent Gold Mines around the district. There was a desire to process the ore and make it as small as possible to separate the Gold from the rock. This gave Henry and idea…

He applied his milling principles and experience to make flour.

Henry & family moved to the Gilmore Valley (between Tumut & Adelong), the place where Henry built up his business empire. The site of his first Flour Mill was on the Gilmore Creek (Adelong Crossing). This Mill was called STAR FLOUR. This mill was built for his son, George, who passed away at the age of 2, his family name MOON and the Stars. Hence the saying “The Son, the moon and the Stars”.

He built many Mills around the district of Tumut, Gilmore and Adelong areas and the profits from these Mills was used to build his first (and only) hotel “THE RISING MOON”.

The Rising Moon Hotel was built in 1854 and with the help of his mill workers. The Hotel took over two years to build and was completed in 1856.

The RISING MOON HOTEL stands where the ROYAL HOTEL is today.

Description of the RISING MOON HOTEL in 1856: Henry moon placed this “for sale” in the Sydney Morning Herald Newspaper on Wednesday 5th November 1856.

The house, which is a weather boarded building, with verandah, and boarded floor, contains first and second parlours, from the former runs off one, from the latter two convenient bedrooms, with a small store opening into the rear; tap-room, bar, with every convenience, and small parlour run off; the whole of the interior lined with half-inch boards, calicoes, and papered. Also, detached, a spacious saloon, 45 feet long by 18 wide, with four large sash windows, cedar-pannelled doors, with a fireplace in the centre, and brick chimneys, and stage running across one end a large entrance ball, with three bedrooms running from it, two of the latter with fireplaces and brick chimneys. The saloon was erected expressly for public meetings, balls, etc; it is substantially built studded, lathed, and plastered both inside and out, and magnificently finished and fitted up in a superior style, with a splendid square pianoforte, which will be sold with the building. Likewise a detached kitchen and servant's' room, fitted up with a first-rate oven, brick floor, six-stalled stable and hayloft, fowl-house, and good yard.

It appears Henry still owned the Rising Moon Hotel up until it was sold to Charles Fraser in 1872. There were a few licensees that ran the hotel over the years including, Thomas Davis who was the Licensee from 1857-1858.

Charles Jones who was at the Rising Moon Hotel up until his death in 1866, aged years. Charles jones is buried in the Pioneer Cemetery Tumut and on his gravestone reads:

“Sacred to the Memory of CHARLES JONES Who, after years of suffering which originated in his efforts to save life and recover the bodies of the dead at The Gundagai Flood in June 1852, departed this life on the 7th February, 1866, Aged 64 years” During the time Charles Jones was the licensee of the Rising Moon Hotel, it seems as though the Hotel name was changed to the “Old Rose Inn” around 1862 and was known as this until it was sold in 1871/1872. It’s unclear if there is a connection to the Old Rose Inn, in Gundagai, as records state Charles Jones as the Licensee here. 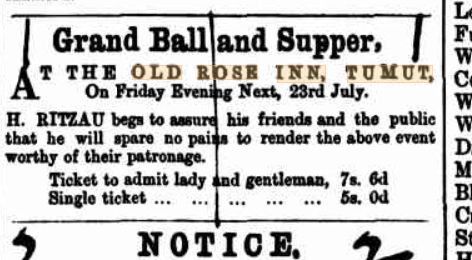 In 1872, Charles Daniel Grant Fraser opened the Royal Hotel Tumut on 22nd of July, however his official opening was on August 2nd, 1872, where he hosted ball with refreshments. Fraser kept the best Ales, Wines, and Spirits to merit patronage. The Hotel was equipped to host Theatrical companies, having a large and commodious ball room, and well-fitted stage attached.

Charles Fraser, American born in 1832 and died in Tumut 1885, aged 53 years. He was the owner and innkeeper of the Royal Hotel from 1872 to 1885. After Charles passing, his wife Mary Ann Fraser (Nee: Kelly), was granted the property and business of the Royal Hotel by the Supreme Court of NSW. Mary Ann became the Innkeeper and Hotel Licensee from 1885 – 1899.

During this time the hotel saw a few changes and was burnt by fire. The Royal Hotel and the large stables adjoining to the venue caught fire in 1878. This fire burnt so fiercely that there was no hope in saving the premise. The Townspeople and other, strenuous exertions resulted in saving the race horses, but all the saddlery and harness was destroyed.

Mary sold the hotel in 1899 to Thomas O’Dea, an Irishman immigrant who arrived in Sydney in 1877. Thomas O’Dea (Venue picture attached) fully renovated the Royal Hotel in 1905 - O'Dea' Royal Hotel.

Having learned that all improvements to above hotel.

A contemplated up to the present time, were finished. We paid a visit of Inspection lately and were well impressed with the enterprising spirit possessed by the worthy host and hostess, Mr. and Mrs. O'Dea, in having provided a building second to none in any country town for the accommodation of patrons, and in toast respects quite Equal to the best city hostelries. In the first place, many excellent alterations have been made in the plan of the original building on the second floor. Where rooms were considered too small two have been transformed into one and a large dining-room that existed there has been divided off by lath and plaster partitions into a cosy sitting and bedrooms. A long corridor runs from end to end of the building, off which there are six bedrooms out the right-hand side of the landing on top of the staircase, and ten rooms including a parlour and bathroom on the left-hand side. A back stairway leads to the new additions which have recently been made to the hotel, and from a long hall access is gained to nine new large, bedrooms, and a short passageway, leads to a balcony tile end of which is apportioned off as a bathroom, where hot or cold baths can be had by turning taps connected with the Council's water main. hot water being produced by a line of piping passing through a boiler fixed in at the back of a magnificent range in the kitchen. To ensure Safety against bursting of the pipe The connections from the

Boiler to the bathroom is all copper, it being contended that thick metal is flexible and allows for contraction and expansion, whilst iron is liable to break with the pressure that boiling water may create. In the new additions, low stairs, are dining and servant’s rooms. Three commercial travellers' sample rooms and two public bedrooms. The latest improvement added to the building, on the ground floor, is a brick structure capable of being carried up a second story when desired. In this Mr and Mrs. O'Dea's private sitting and bedrooms. In all there are 60 rooms in the hotel, everyone well adapted for the use to which it is intended to be put and the furniture throughout the whole of the premises is exactly in accordance with requirements- of comfort and convenience and shows that great care has been taken over the choosing of it. Every room in the house is lit by acetylene gas, the newest and best light known to science. The above is just a brief outline of the class of hotel the Royal has now been raised to, and readers should easily be able to form an opinion, on reading same, the sort of accommodation that is obtainable there.

The host oud hostess, whose capabilities as managers of the hotel are well, and favourably known, distinctly. Avowed their objection to laudation and praise, which they deem superfluous. They are catering for public patronage and are using every effort to deserve such Which we hope they will obtain.

The whole of the additions were planned out and made by Mr. F. Kinred, and reflect the greatest of credit on him as a a builder. In the architectural work he got good assistance

From the hostess of the house, who knew what she required and planned accordingly.

Thomas O’Dea, went onto sell the Royal Hotel after 11 years of ownership in 1910. Him and Mrs O’Dea took a well-deserved holiday after the sale.

On Thursday morning last, during break-fast hour, at Mr. E. G. Sweet's Royal Hotel, Tumt, a startling tragedy occur-red A waitress, Miss Annie Morgan, went to the Kitchen, following her customary duties, when without a moment's warning, she was murderously attacked by the Japanese cook, Jack Ozono, with the butcher's knife The girl's throat was terribly gashed, but the injuries were unfortunately not fatal, In grasping the knife, her hand also was badly cut. Eventually she managed to push her assailant off, and ran to the dining-room for assistance, bleeding freely. Dr Tyrie, medical examiner for the A M P Society, happened to be in the room, and immediately attend-ed to the injuries. On hastening to the kitchen, the proprietor found that the cook had disemboweled himself. Both were taken to the Tumut Hospital, but the man died at 11 o'clock the same night. When first met after the tragedy, the girl ex-claimed, 'Jack has stabbed me, and I never said a word to him.' Later on she stated that Jack was mad with drink and she hoped he would rot be punished for his deed. On being questioned as to whether there was any quarrel, Jack replied in the negative, and added that Miss Morgan was the best girl he ever worked with, and he was sorry. From evidence adduced at the inquest, it was shown that Jack had been drinking heavily of late, especially the previous night The inquest was postponed on account of medical evidence to the effect that Miss Morgan was unfit to give evidence. The girl is still in the hospital, but out of danger. Her age is 23 years, and she was employed at the Royal for the past five months. Jack had been cooking at the Royal for 12 years and three years in the service of Mr Sweet From vague particulars to hand.

H R Fowler operated the Hotel around 7/12/1926, she was in association with Mrs Vera Wood, who in August 1928 transferred the Hotel License to her name.

Over the next few years, there were a few changes to the venue with new licensees:

This company had a few licensees, including:

At this time there were 26 bedrooms upstairs and in 1968 10 motels were built in the yard. The venue features a private quarter with 1 Bedroom, Dining Room, Kitchenette and bathroom.

Redefinition of boundaries were approved by licensing court Tumut on 18.09.1969

Since the Royal Hotel first open since 1856 (as the Rising Moon Hotel) there has been some massive changes to the venue.

It is currently locally owned and operated by the Lancer Group Pty Ltd.